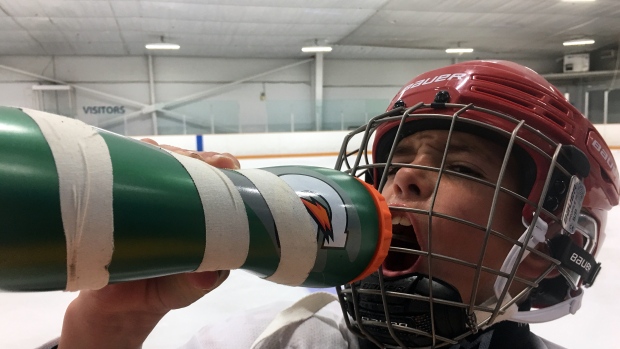 Children influenced by advertising for unhealthy food and drinks

(CBC News) — Most children and teens shouldn’t consume sports and energy drinks, and the products should no longer be marketed to them, the Canadian Paediatric Society says.

In a new position statement released Tuesday, the society said sports drinks are high in sugar, which contributes to the obesity epidemic as well as dental cavities.

Caffeinated energy drinks are claimed to reduce fatigue and improve concentration, but the stimulant caffeine may affect children and teens more than adults, given their smaller size and weight.

Sports drinks contain a mixture of sugars and electrolytes. The beverages are often marketed as fluid replacements appropriate for sports or vigorous physical activity.

“The vast majority of children should really just hydrate with water. It’s the best thing for them,” said Dr. Catherine Pound, a pediatrician and researcher at the Children’s Hospital of Eastern Ontario and a co-author of the statement.

Pound said consuming a lot of energy drinks with caffeine in a short period of time can cause serious side-effects, especially in those with underlying health conditions, such as children with attention deficit hyperactivity disorder. (…)